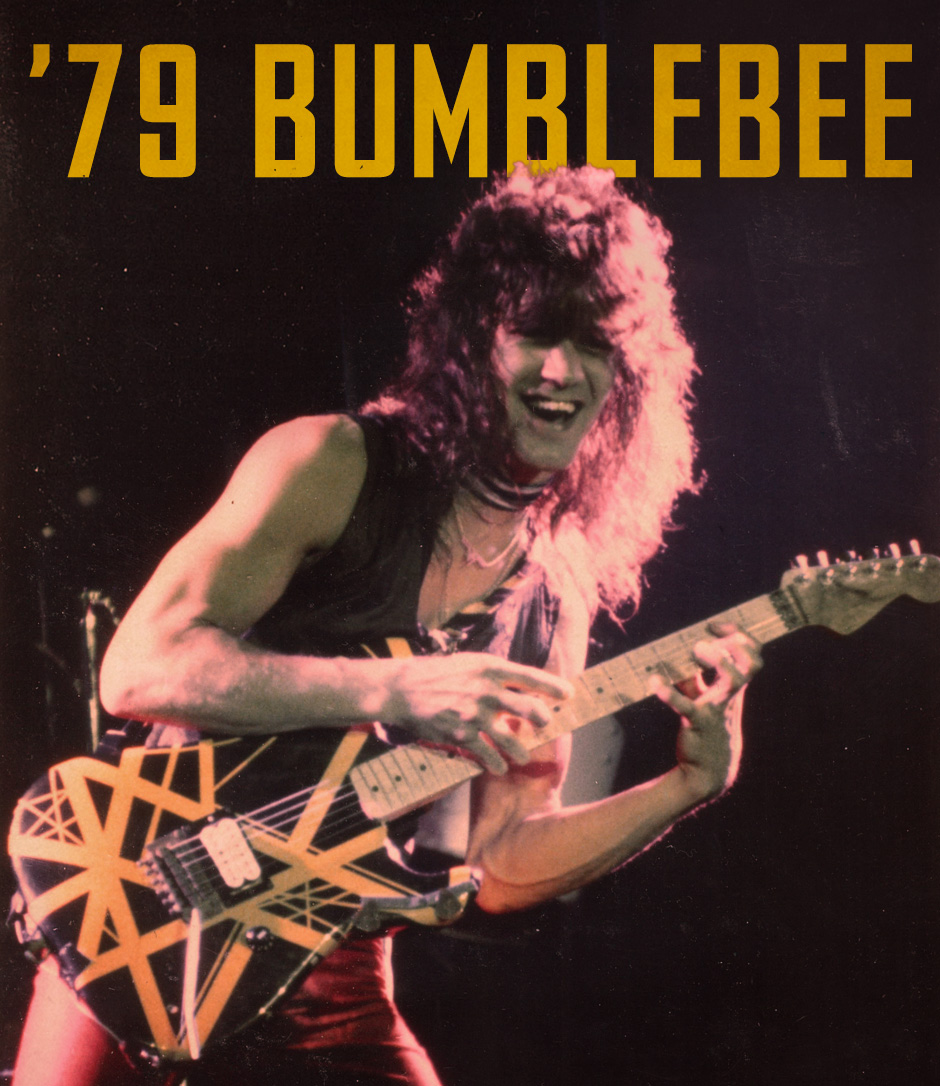 During the process of recording 1979 album Van Halen II, Eddie Van Halen sought something fresh to play other than his original "Frankenstrat," which at the time was being heavily copied by just about every major guitar company in the world.

Eddie had the idea to build a new guitar with an ash body and black-and-yellow-stripe paint job, with rear-loaded electronics so there would be no pickguard. He tasked Wayne Charvel to make the original guitar, which had a maple neck, maple fingerboard and dot inlays. Other features on the first-incarnation guitar (as pictured on Van Halen II) were a standard nut, single Mighty Mite® humbucking pickup with transparent bobbins, single chrome volume knob, original Charvel® six-screw brass tremolo bridge, and Schaller® tuning keys. 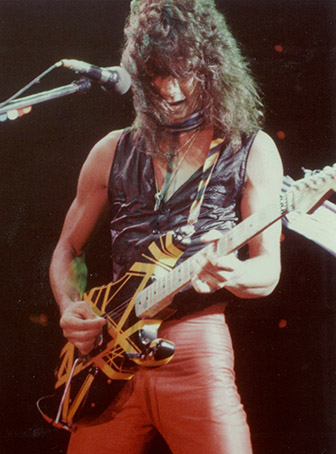 While pleased with the looks of the guitar, Eddie was less impressed with its tone and quickly began tinkering with it, as he was prone to do. He installed a new Boogie Bodies maple neck with a natural headstock, unfinished back (which he has always preferred) and 12"-radius dot-inlay maple fingerboard.

Next to go was the Mighty Mite pickup. After selecting a DiMarzio® Super Distortion humbucking pickup, he swapped out its ceramic magnet for an alnico 2 magnet from a Gibson® PAF. He rewound the pickup by hand, dipped it in paraffin wax and put copper tape around the windings.

Eddie also stripped out the original Charvel bridge, leaving its six screw holes behind. He instead outfitted the instrument with a prototype two-point Floyd Rose® bridge and locking nut with retainer bar, becoming the first professional rock guitarist to use a locking-nut tremolo system. He also swapped out the chrome volume knob with a Strat-style skirted "Tone" knob. After all these modifications, only the original body, striped paint job, screw-eye strap hooks and Schaller® tuners remained from the first version of the guitar.

"Bumblebee," as it would come to be known by fans, debuted on the cover of the 1979 album Van Halen II and was heavily played by Eddie throughout the 1979 world tour.

Although Eddie continued to wrestle with the overall capabilities of the guitar, the black-with-yellow-stripes theme became insanely popular. Bumblebee remains a longtime favorite for Van Halen listeners everywhere.

In an eternal sign of deep respect, Eddie's original Bumblebee guitar was buried alongside Pantera guitarist "Dimebag" Darrell Abbott, who died tragically in 2004. Eddie was Dime's main influence and Bumblebee was Dime's all-time favorite guitar. 40 years later, EVH has meticulously recreated this wildly iconic guitar in the form of the limited edition '79 Bumblebee. 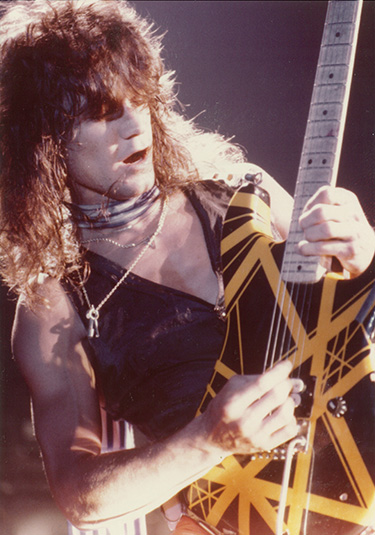 True to Van Halen’s pickup recipe, the instrument has been outfitted with an EVH ’79 Bumblebee humbucking bridge pickup. EVH also matched the Bumblebee’s six screw holes, (hidden under the original prototype non-fine tuner locking tremolo bridge that EVH recreated just for this project), along with the original prototype locking nut. All hardware has been reliced, including the custom brass string retainer, screw-eye strap hooks, side output jack and original period-correct Schaller® tuning machines.

Its black-with-yellow-stripes paint job has also been reliced to match the wear and tear from his heavy year of touring in 1979, and the guitar is stylishly finished off with chrome hardware.

Notably, the back of the headstock of each guitar bears Eddie Van Halen’s signature, adding to the value and the once-in-a lifetime collector’s nature of this instrument. 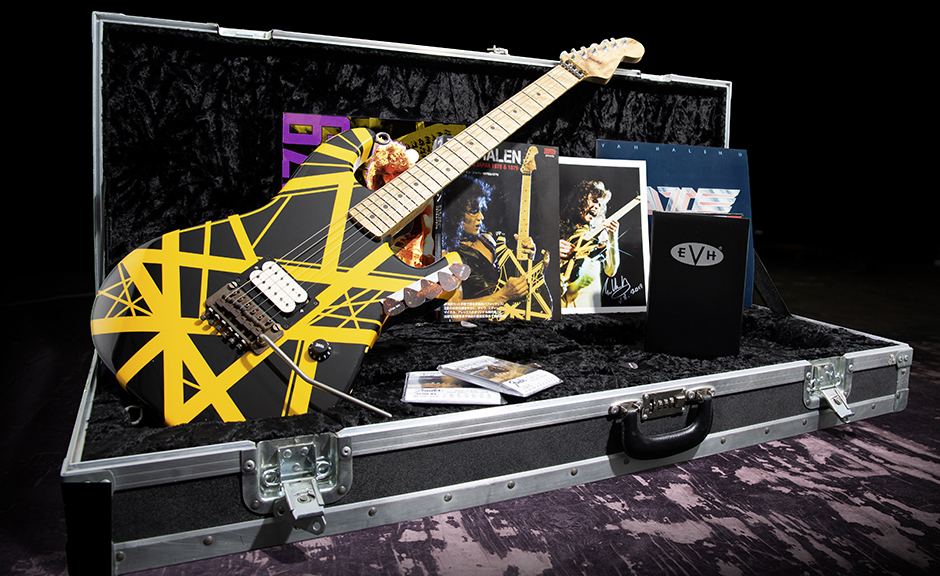 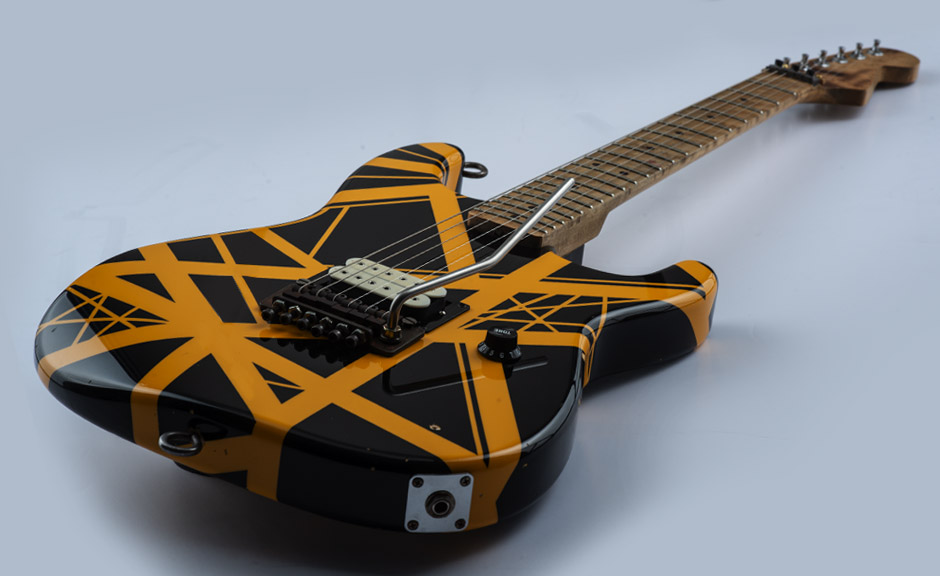 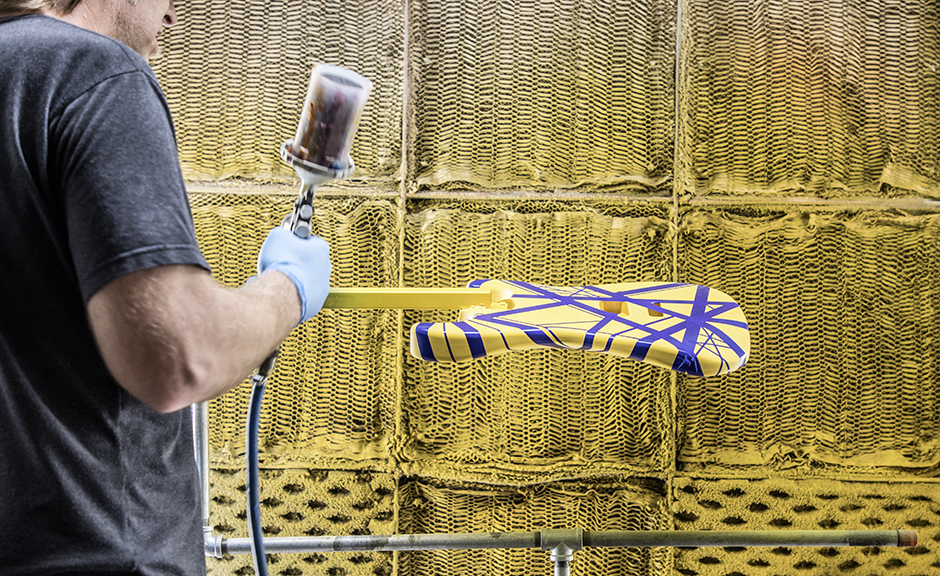 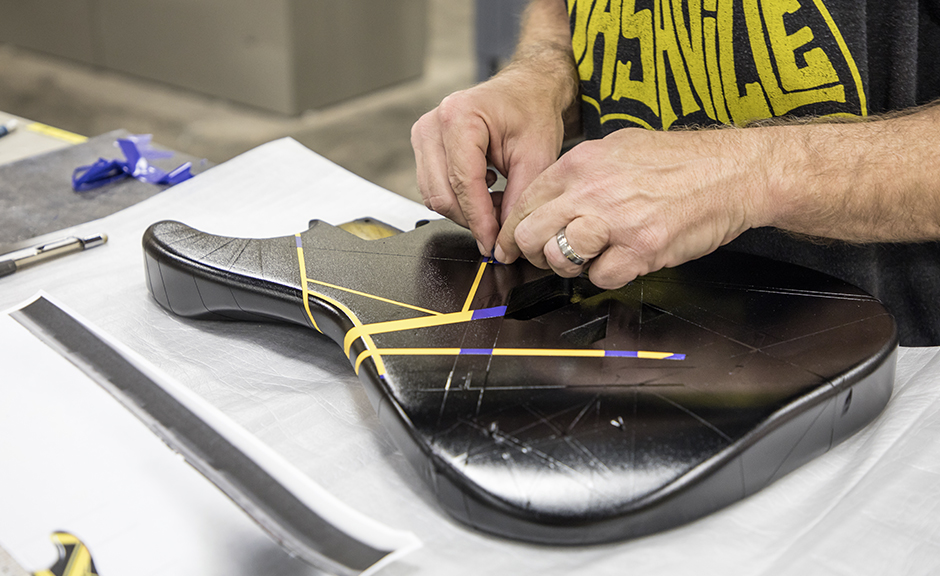 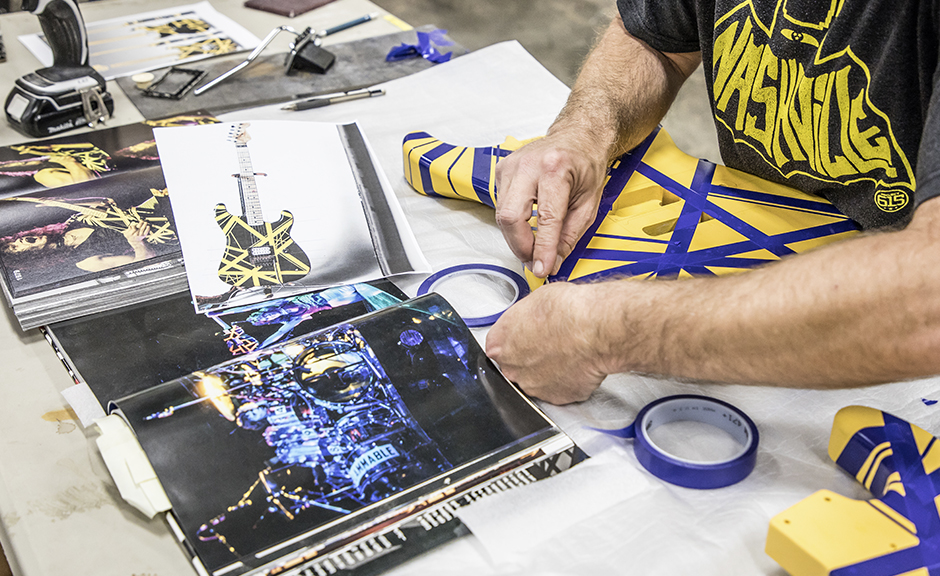 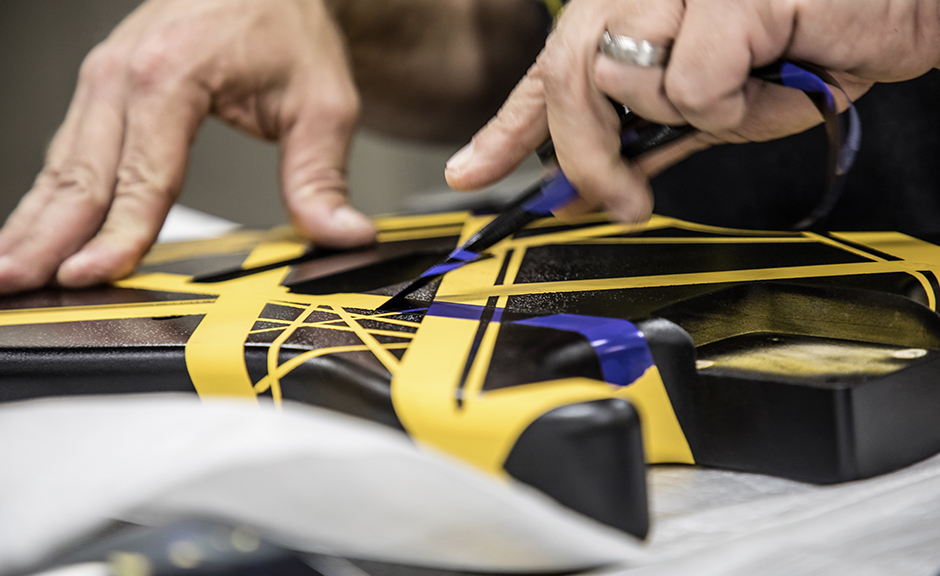 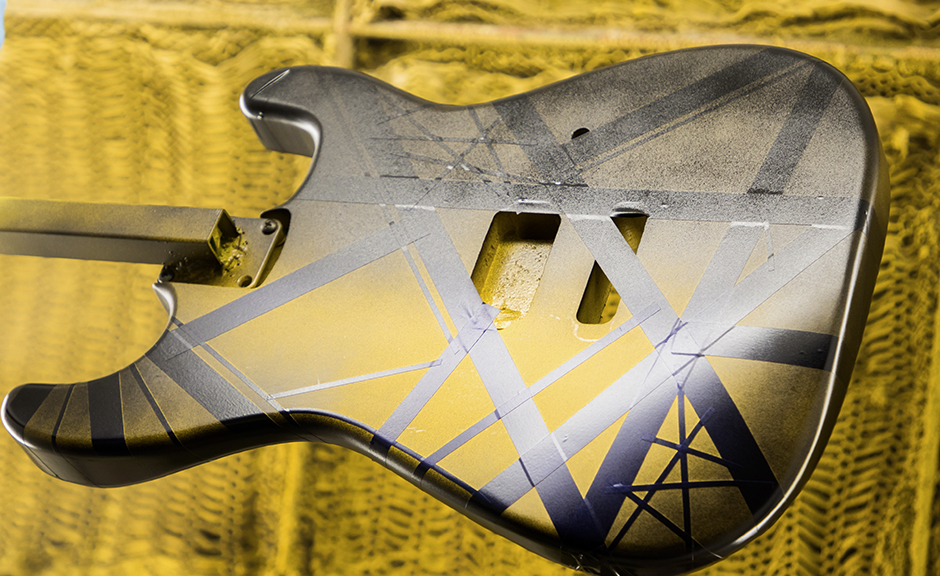 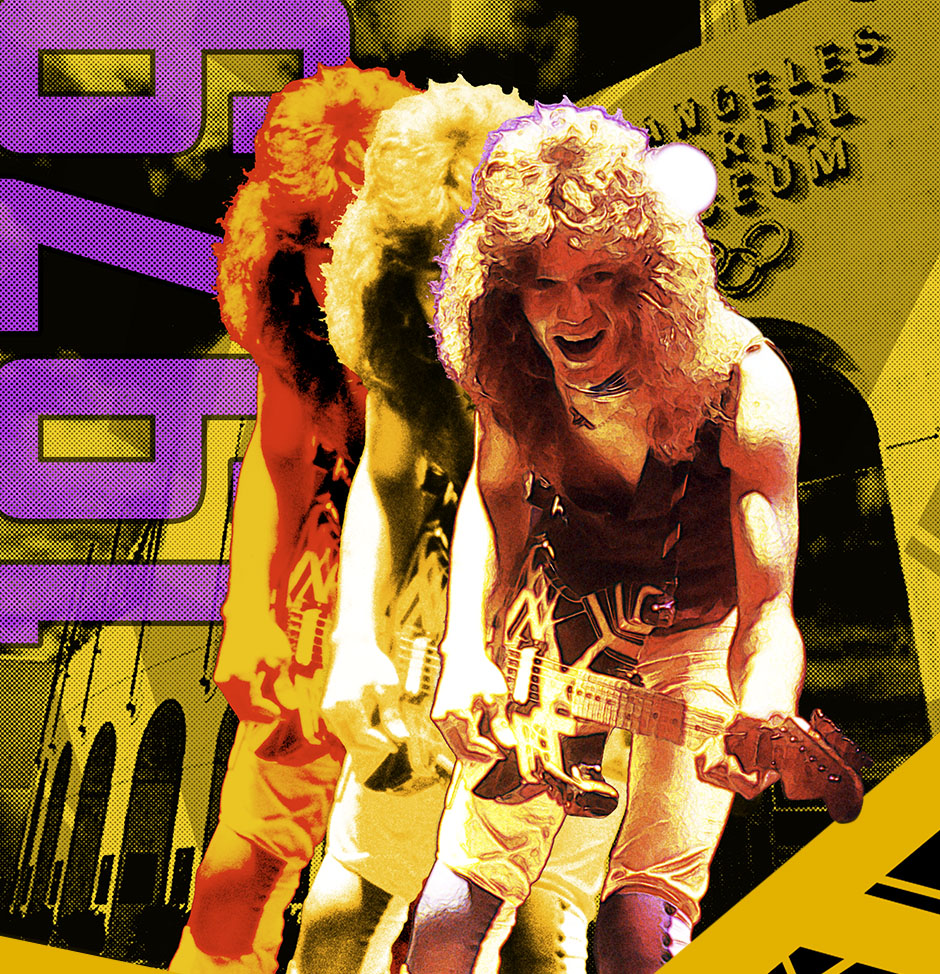