Eddie Van Halen's wildly iconic black-with-yellow stripes Strat®-style guitar made its official debut on the cover of the 1979 album Van Halen II. “Bumblebee,” as it would affectionately come to be known by fans, was heavily played by Eddie throughout Van Halen's 1979 world tour.

40 years later, EVH® has meticulously recreated this world famous instrument in the form of the ’79 Bumblebee. Limited to only a 50-piece worldwide run, this tribute model features all of the original specs including an ash Strat® body, bolt-on birdseye maple neck with oiled back finish, straight 12” radius birdseye maple fingerboard with 21 jumbo frets, katalox dots and black side dots, and skirted Strat-style “Tone” volume knob.

True to Eddie’s pickup recipe, the instrument has been outfitted with an EVH ’79 Bumblebee humbucking bridge pickup. EVH also matched the Bumblebee’s six screw holes, which are hidden under the original prototype non-fine tuner locking tremolo bridge that EVH recreated just for this project, along with the original proto locking nut. All hardware has been reliced, including the custom brass string retainer, screw-eye strap hooks, original period-correct Schaller® tuning machines and side output jack.

Its black-with-yellow-stripes paint job has also been reliced to match the wear and tear from his year of touring, and is stylishly finished off with chrome hardware.

Adding to the value and the once-in-a lifetime collector’s nature of this instrument, Eddie Van Halen signed the back of each headstock. 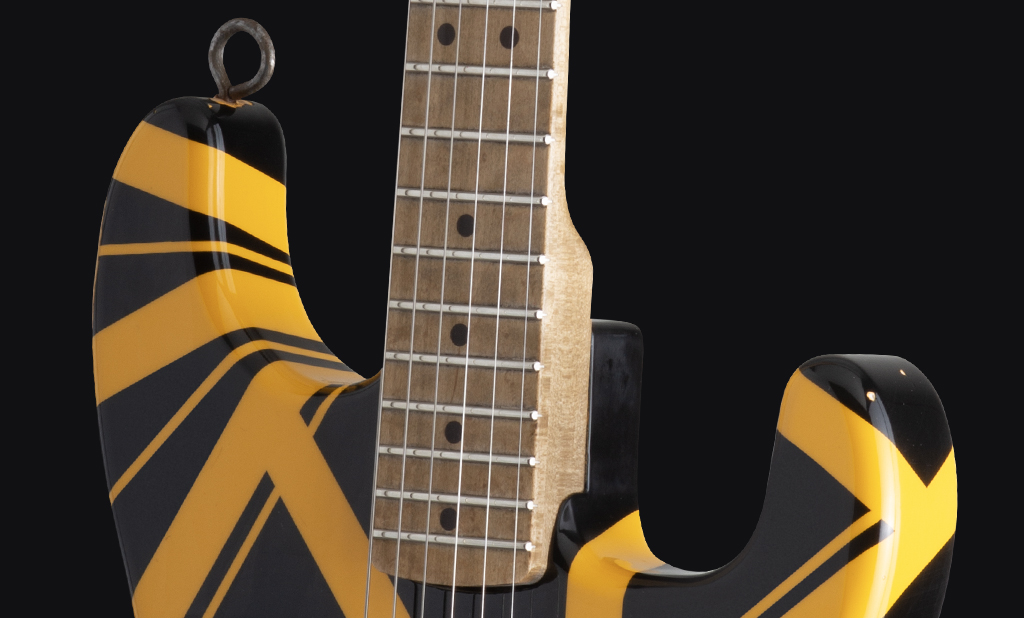 Bolt-on is a type of neck construction that joins the maple neck to the body of the guitar with screws or bolts, resulting in a pronounced tone with more control. Graphite-reinforcement rods flank the truss rod for even more increased neck stability. Highly prized, birdseye maple is extremely hard, very dense and makes for a fast-feeling fingerboard. 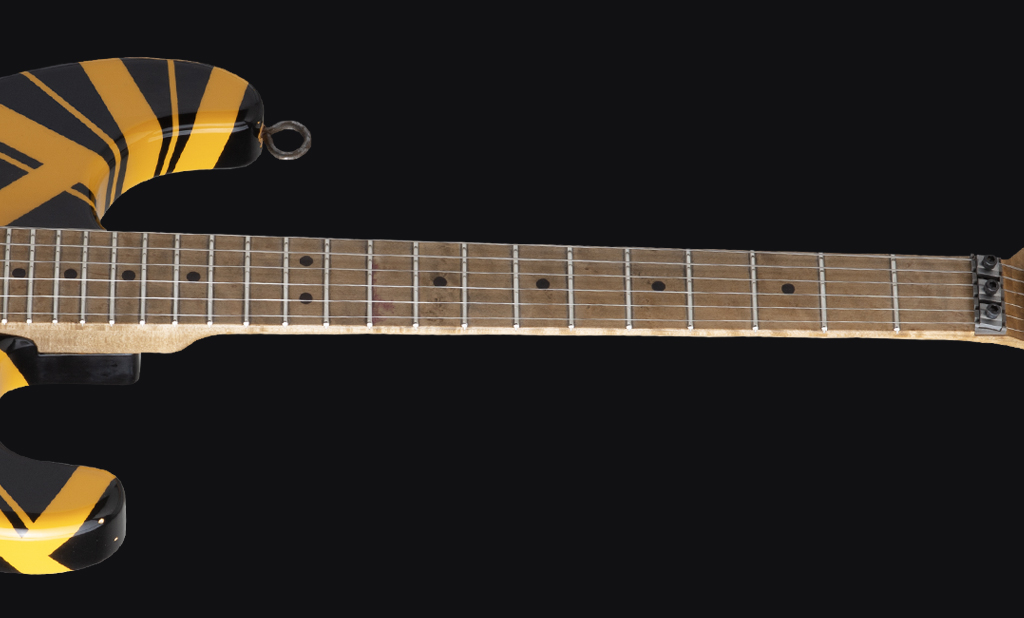 The higher the radius, the flatter the fretboard. At 12”, this flat maple fingerboard allows for easier chording and feels great for rhythm playing, but can also still handle bends during lead playing. Maple is a dense wood that produces bright, snappy tones, articulate notes with bite and a tight low end. Like most vintage guitars at the time, this Eruption tribute features a 21-fret design. The jumbo fret wire slightly increases the distance between string and fingerboard for seamless and comfortable bends. 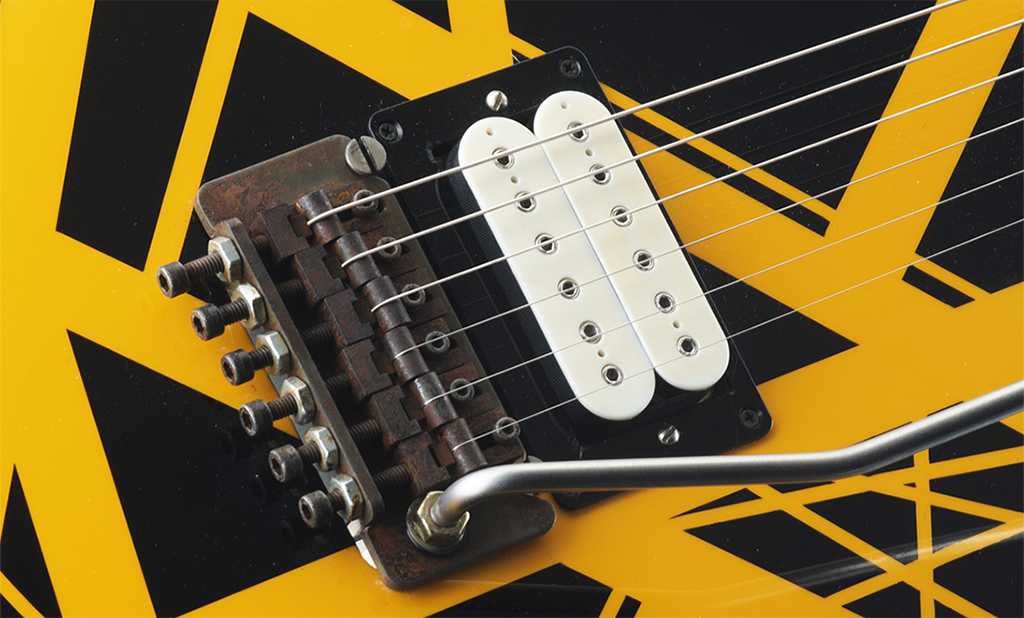 Eddie swapped out the Bumblebee’s original Mighty Mite bridge pickups with a DiMarzio® Super Distortion humbucking pickup. But first he exchanged its ceramic magnet for an alnico 2 magnet from a Gibson® PAF, rewound the pickup by hand, dipped it in paraffin wax and put copper tape around the windings. Unique to this tribute model, EVH created a custom-voiced ’79 Bumblebee humbucking bridge pickup to capture Eddie’s preferred sound, and it roars with distinct note articulation and wicked cut. 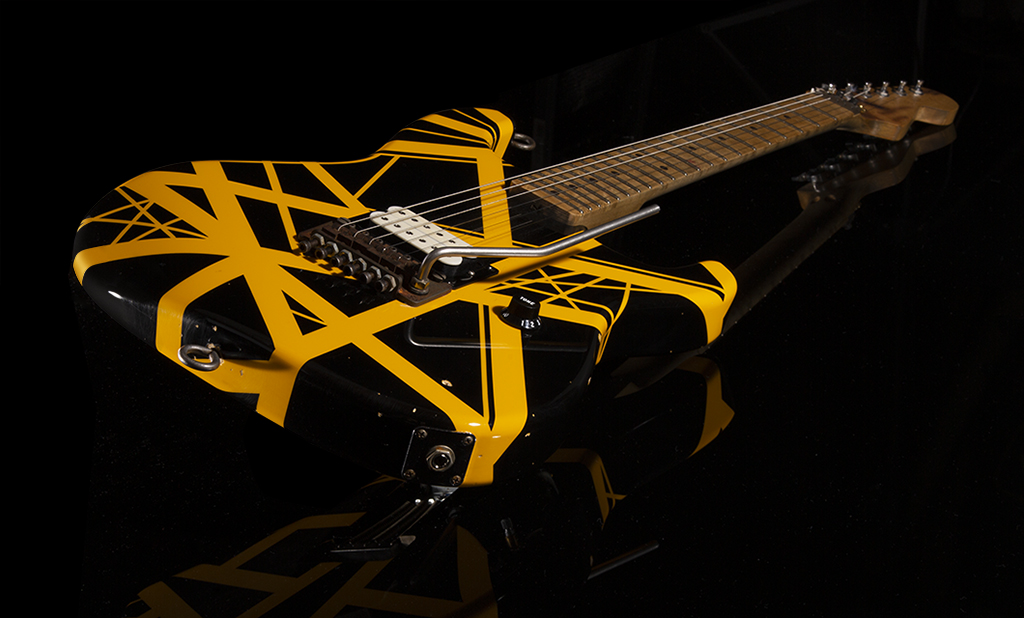 Staying true to the original, EVH recreated a period-correct prototype non-fine locking bridge system and locking nut for this tribute model. Back in the day, Eddie was happy to try out an original prototype from Floyd Rose on his Bumblebee and provide valuable feedback on how to improve the bridge so as to keep the guitar in better tune. That early version appears here. 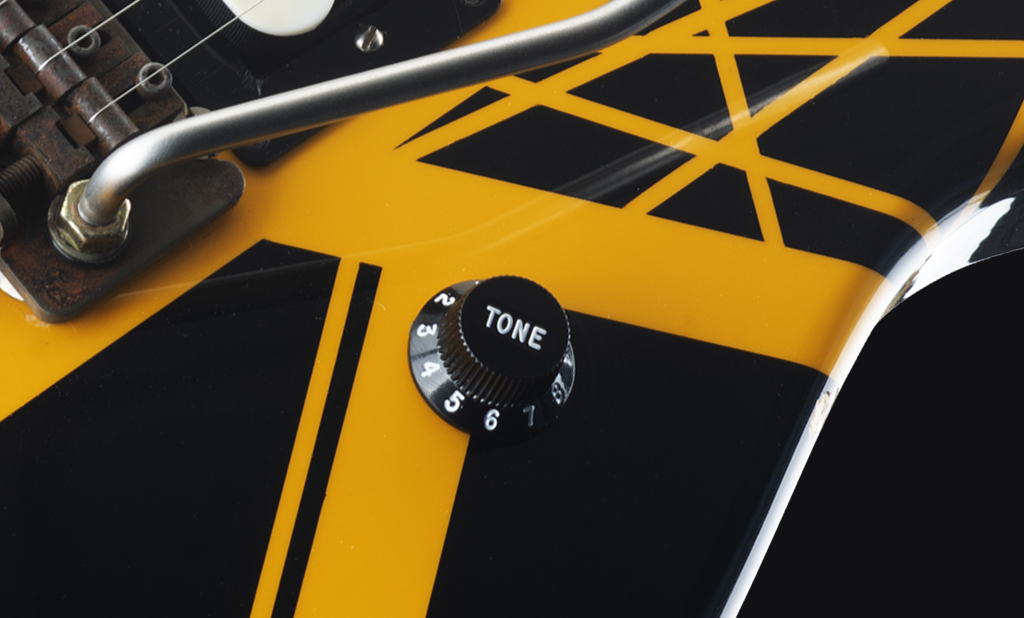 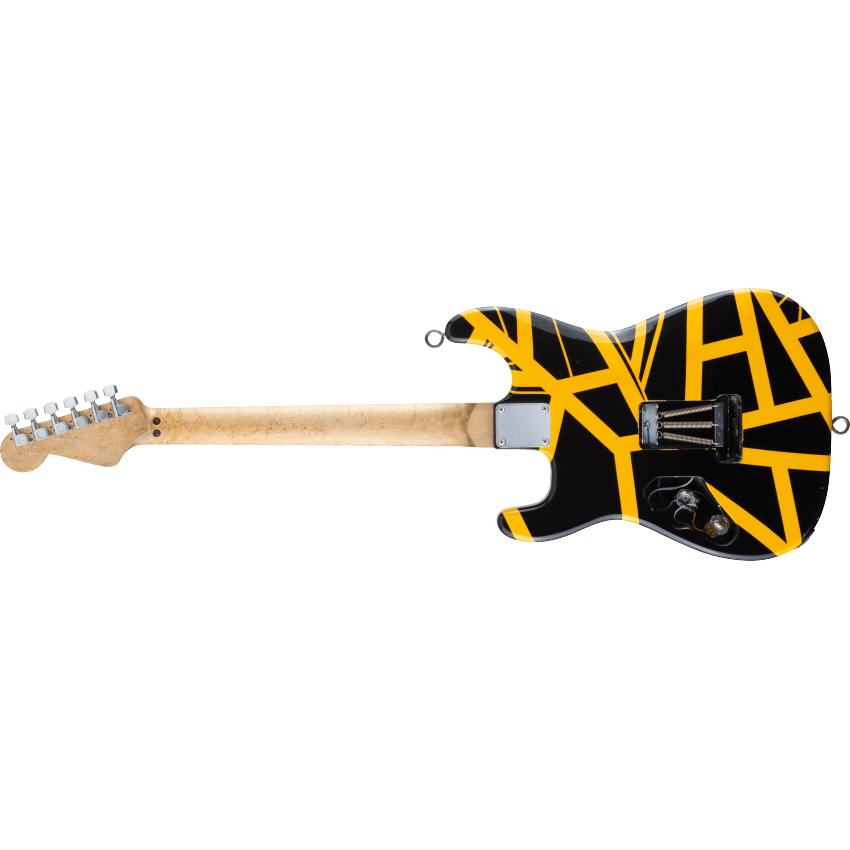 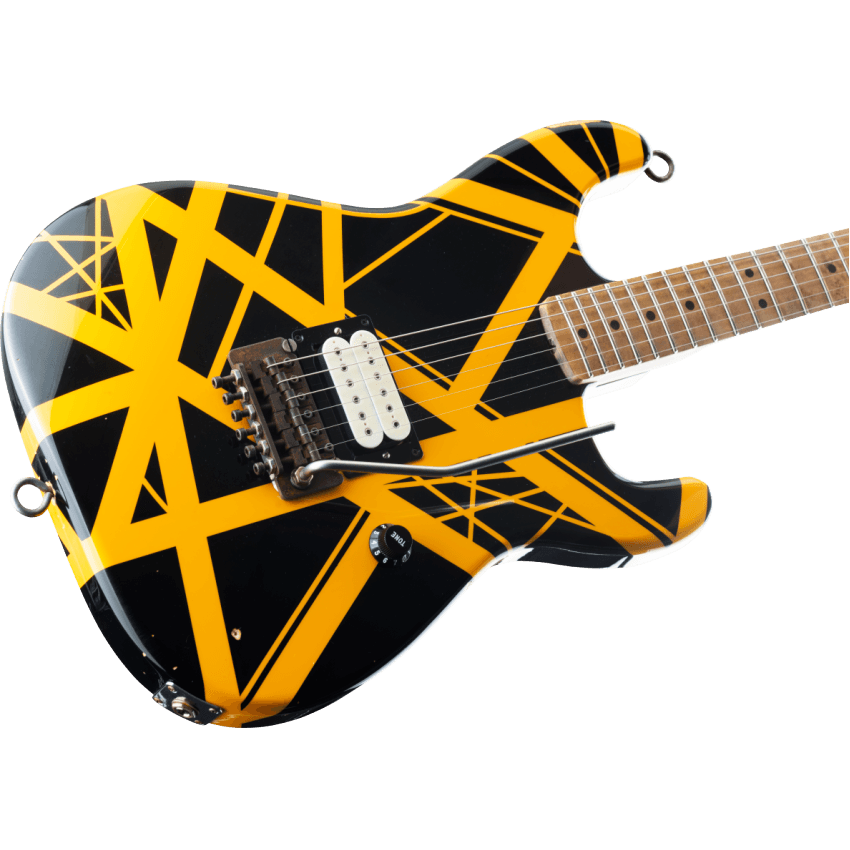 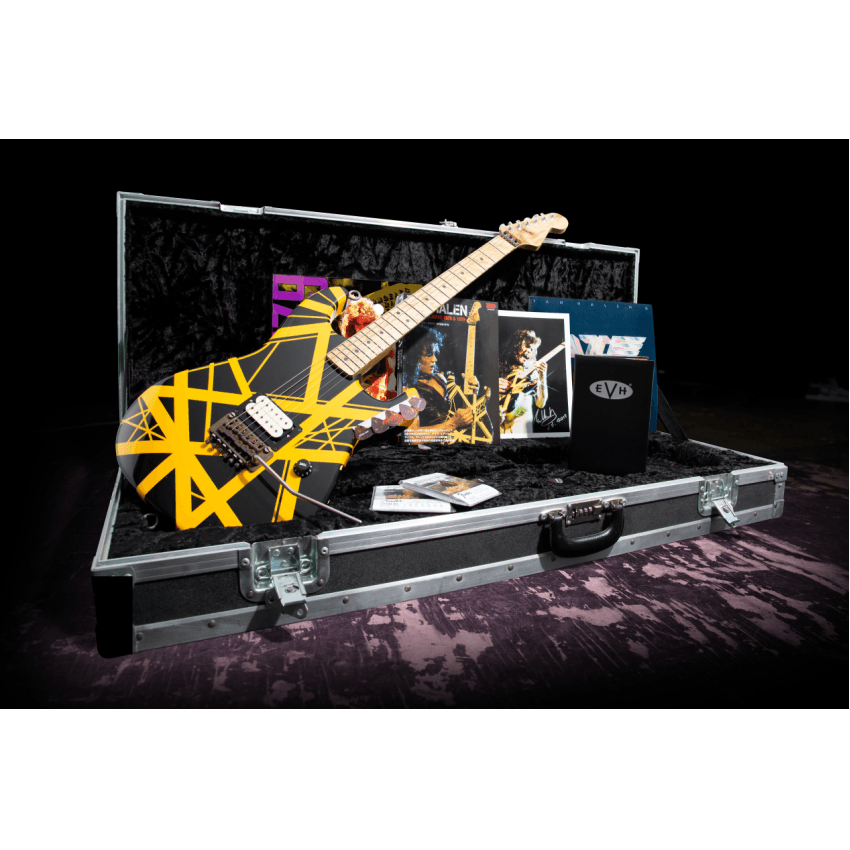 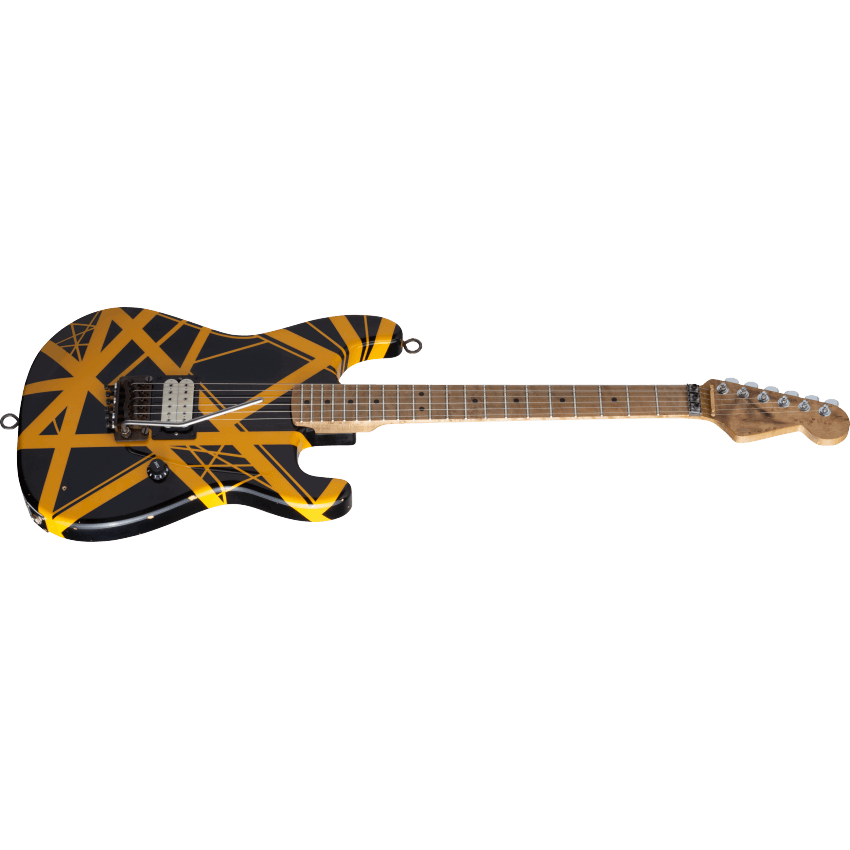 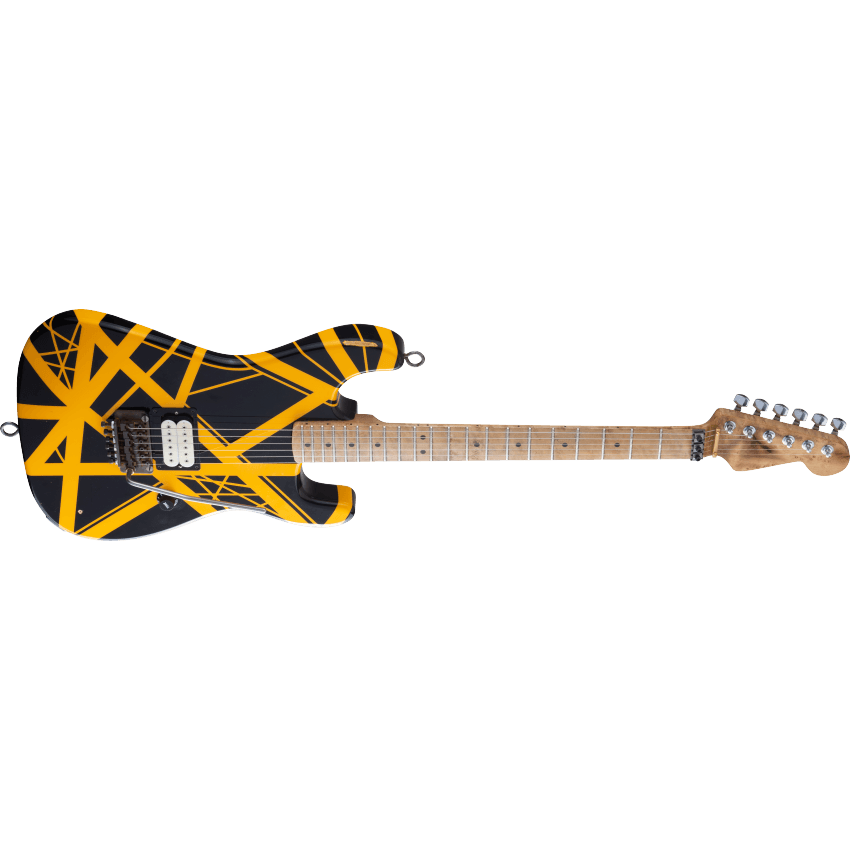 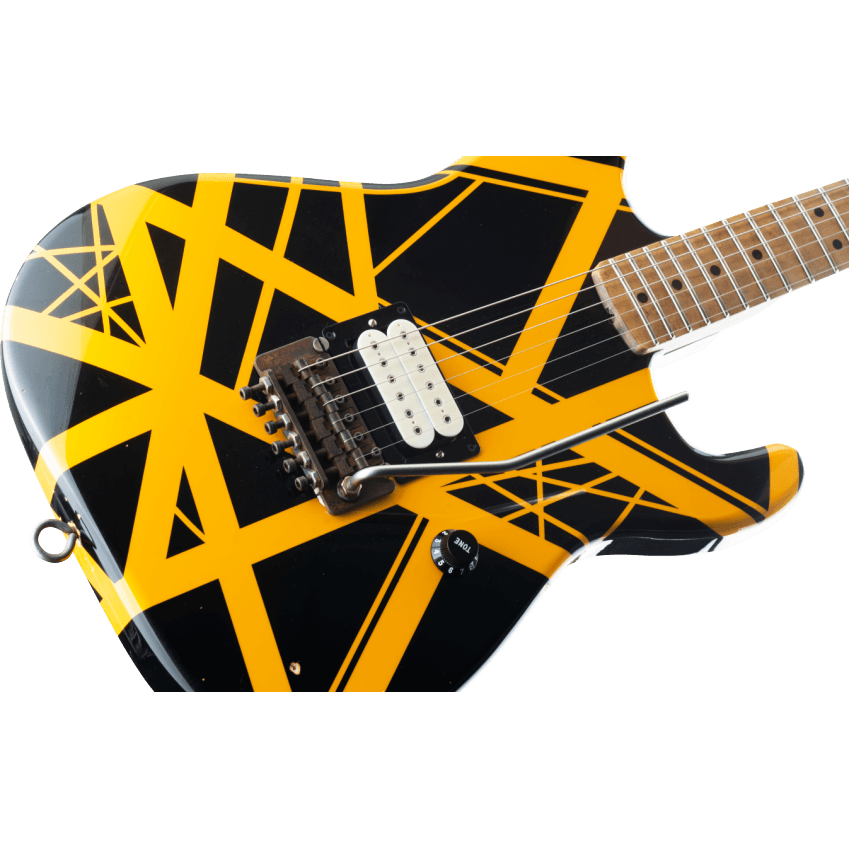 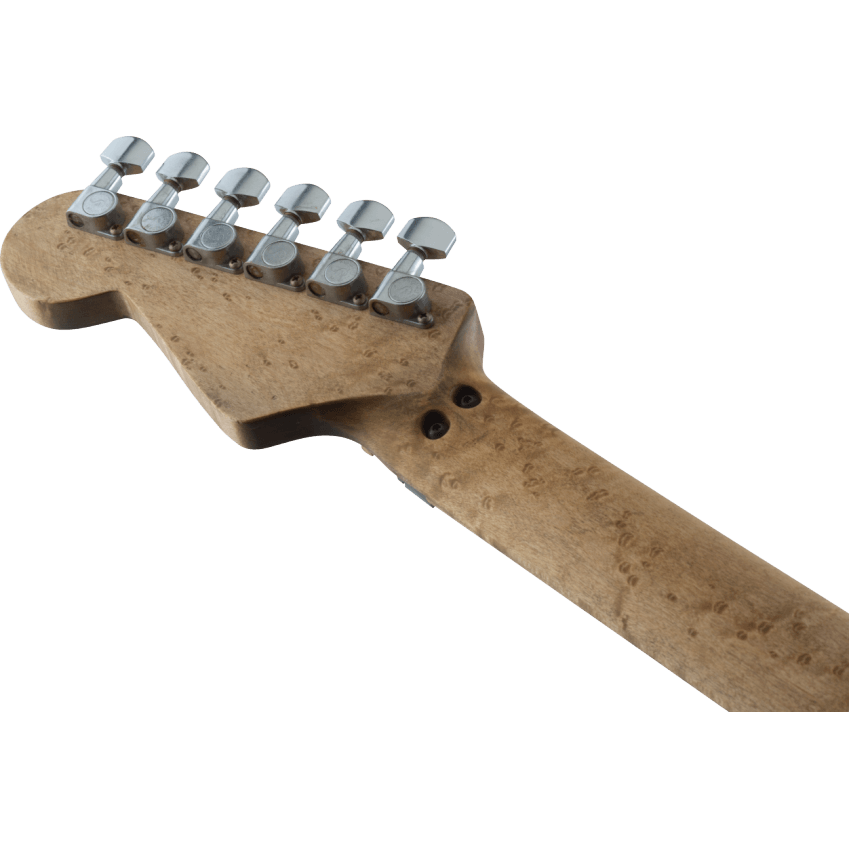 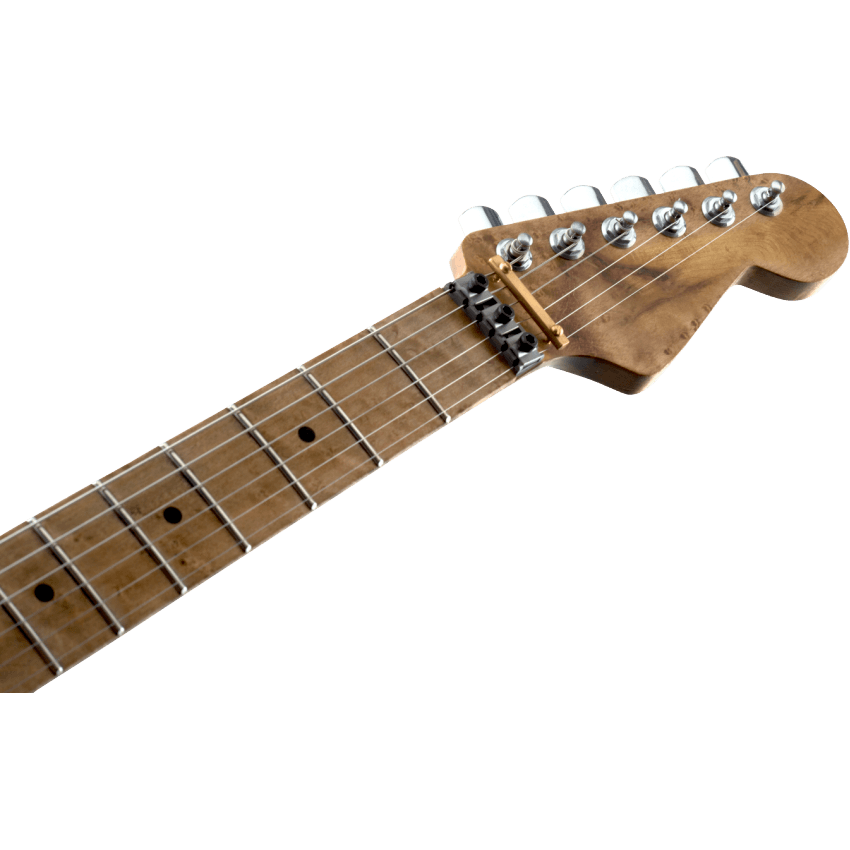