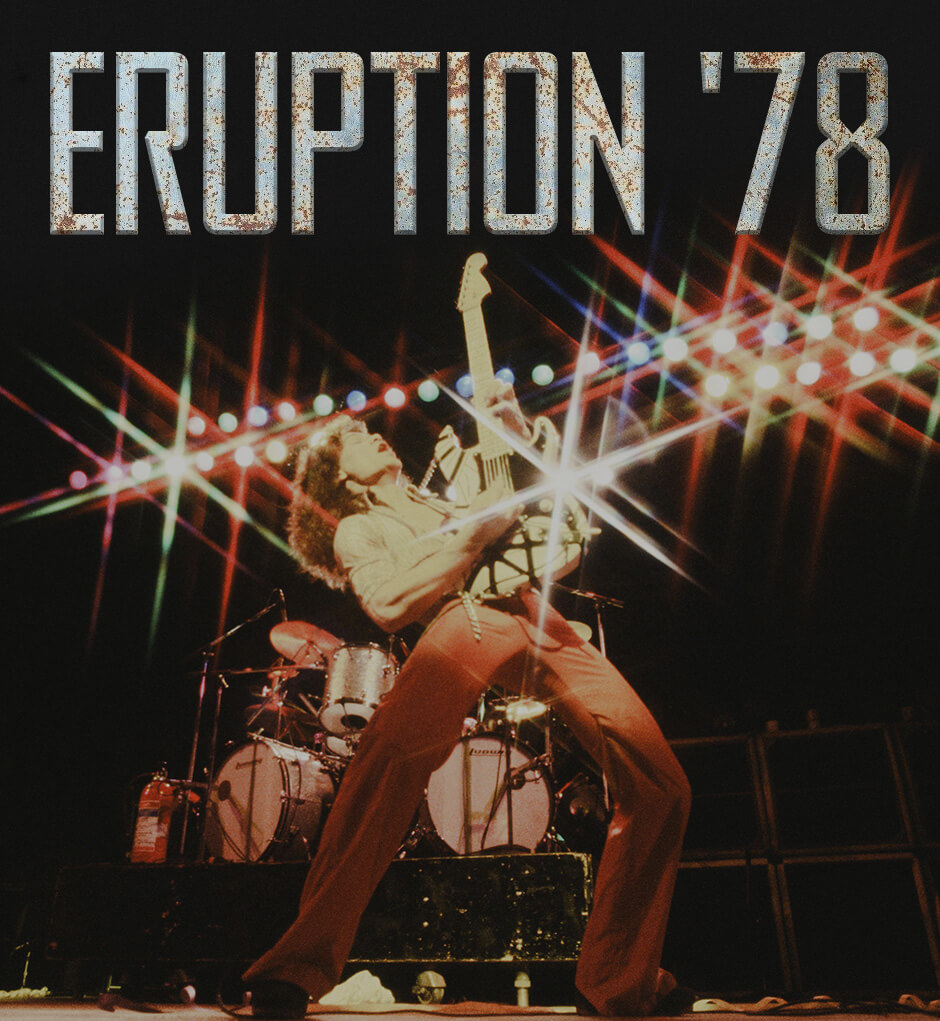 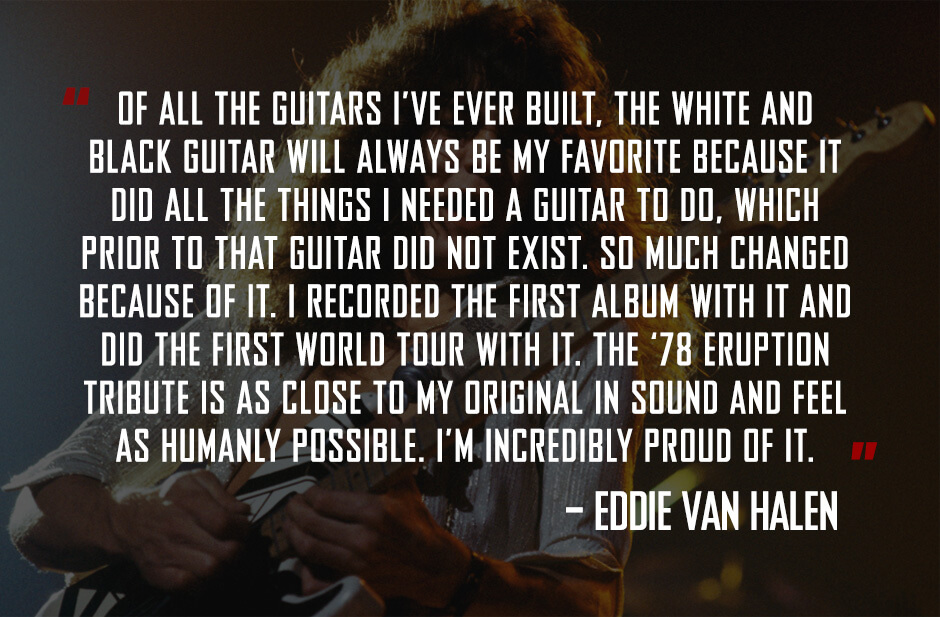 0n the cover of Van Halen’s 1978 eponymous debut album, Eddie Van Halen thrusts his black-and-white striped instrument towards the camera as if he’s showing you the future. He played this guitar on his unprecedented and mind-blowing instrumental track “Eruption”, hence its nickname, and almost immediately, this monumental instrument became a timeless icon, symbolic of a paradigm shift in guitar-driven rock and roll.

While many a fan has attempted to duplicate his guitar over the past 40 years, for the first time ever, EVH Gear has recreated this instantly recognizable axe, as well as his period-correct case candy items. 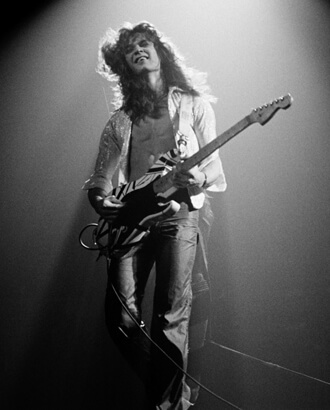 Back when this trailblazing album first appeared, nobody had ever seen or heard a guitar like that because no such guitar ever existed. What was it? You couldn’t buy one.

That’s because he made it himself. The then 22-year-old Eddie Van Halen had the mind of not only a great musician, but also of an innovative inventor—a constant tinkerer who was always messing with his gear. He couldn’t help it. No off-the-shelf guitar had the features he needed to really let his playing take off, and he knew it. He’d tried a few staples in his formative years, but eventually found them all lacking in one way or another. So, he took matters into his own capable hands.

After first starting out with his ’58 Fender Strat, Eddie decided he wanted a heavier piece of wood for the body, so he bought a Strat-shaped body for $50 and a neck for $80.

This new body, of course, came pre-routed for three single-coil pickups, so Van Halen again took up his chisel and soldering iron to install the humbucking pickup, which he had potted himself to reduce feedback by dipping it into a coffee can full of paraffin wax. Also to his preference, he removed the varnish from the neck, which was wider and thinner, and re-fretted it with larger fret wire and Crazy Glue. 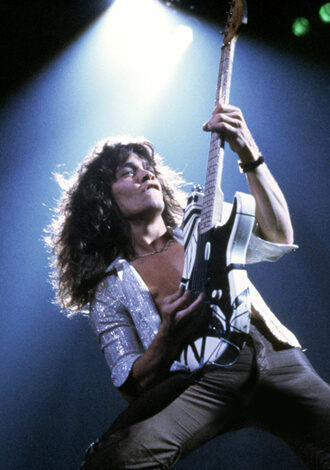 It was this Strat body that first received the distinctive and soon-to-be-iconic striped paint job; Van Halen sprayed it with black and white acrylic lacquer Schwinn bicycle paint. He cut out and mounted his own homemade black pickguard, covering the neck and middle pickup routings, and installed a single master volume knob (although the knob itself, famously, was a “Tone” knob), brass nut and the tailpiece from the ’58 Stratocaster.

Although it didn’t take long to build and although the whole shebang cost him less than $150, this guitar would change the world.

And in a true homage to this pivotal period, EVH has also recreated Eddie Van Halen’s original G&G case and loaded it up with the very items used by him at the time, such as ‘70s-era Fender Super Bullets strings, Van Halen ‘70s tortoiseshell picks, ’78 chain strap and 3-in-One oil. The tribute models are also accompanied by an exclusive collector’s booklet, a backstage pass vinyl cloth sticker, 8”x10” 1978 concert photo of Eddie Van Halen, autographed certificate of authenticity and an autographed vinyl copy of Van Halen. 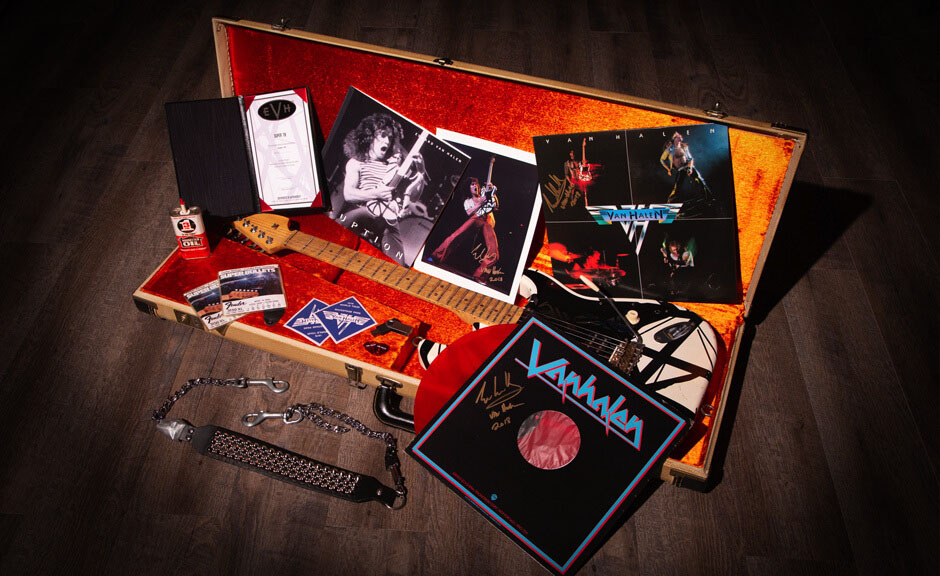 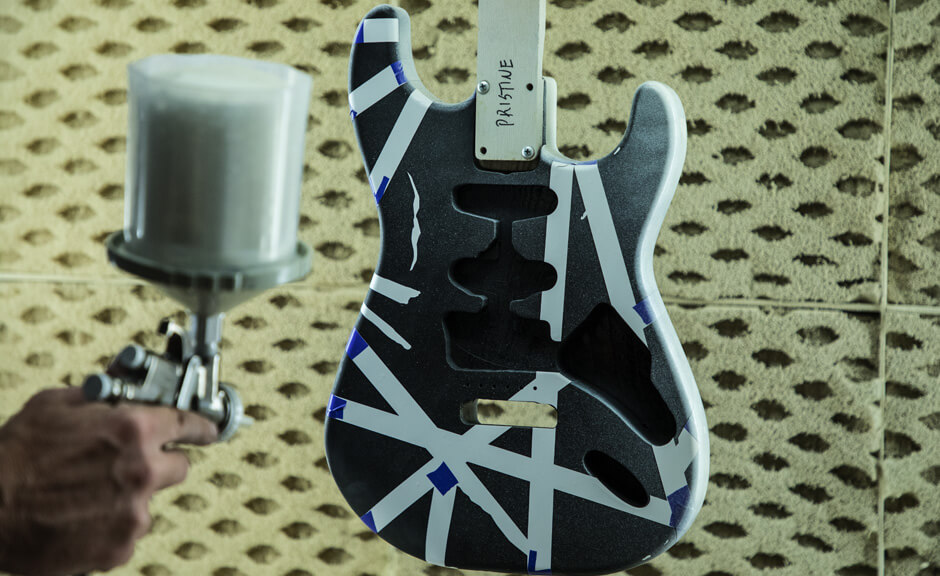 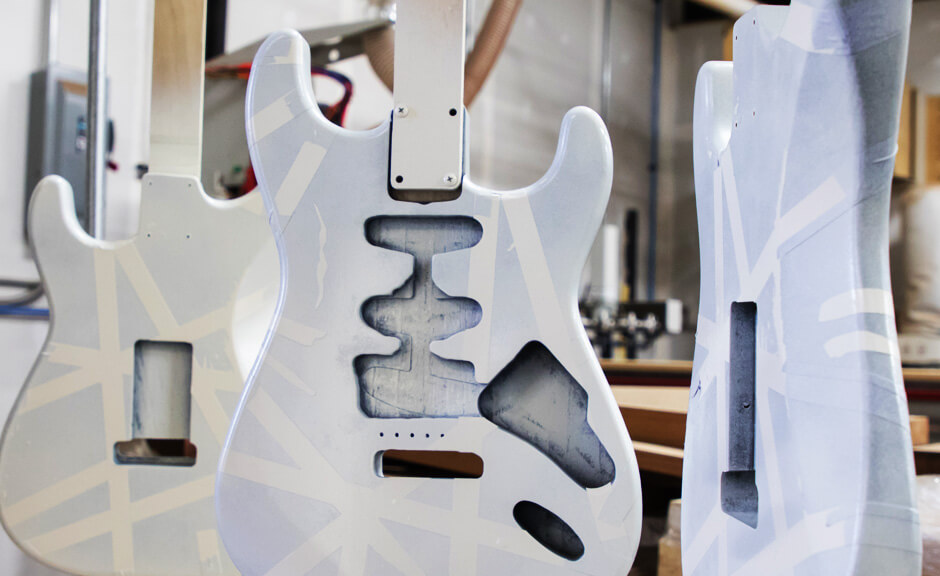 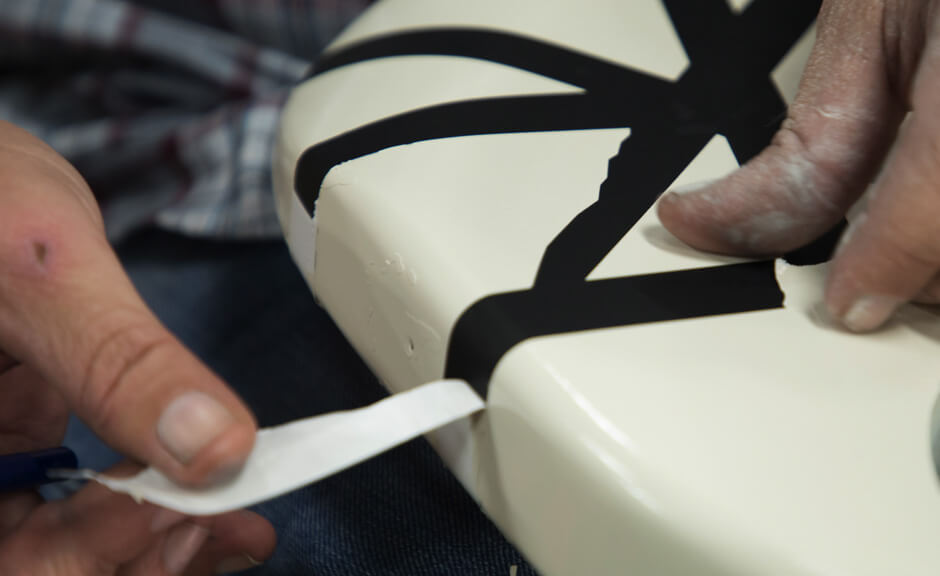 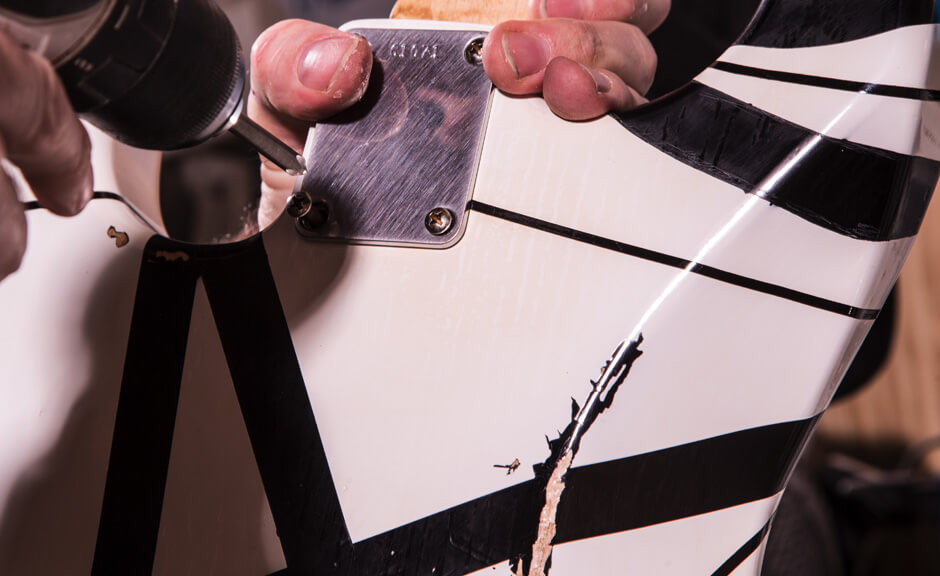 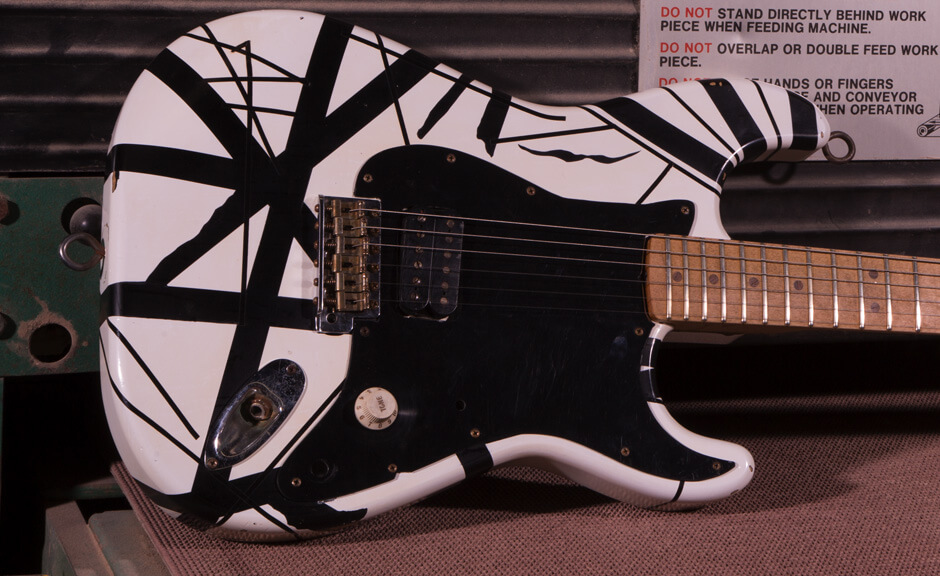 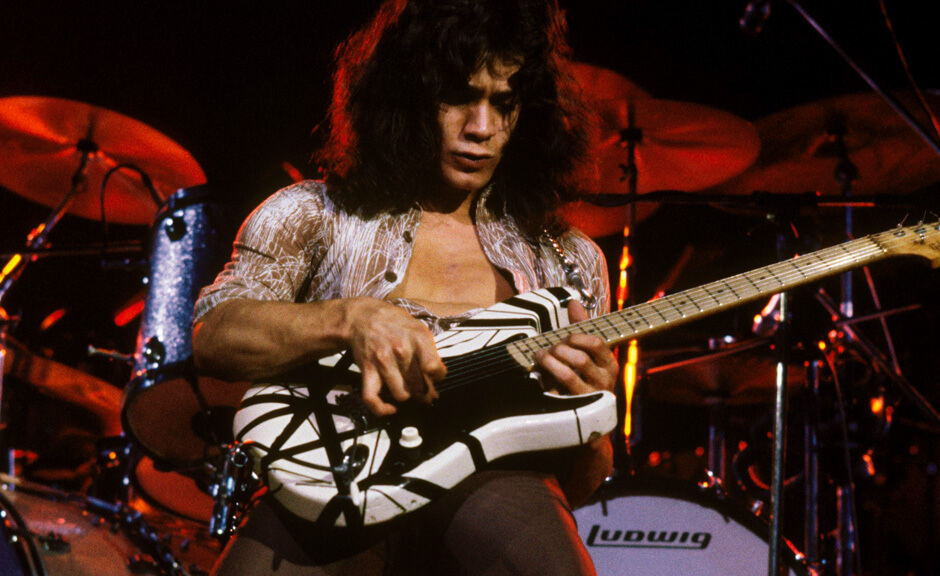 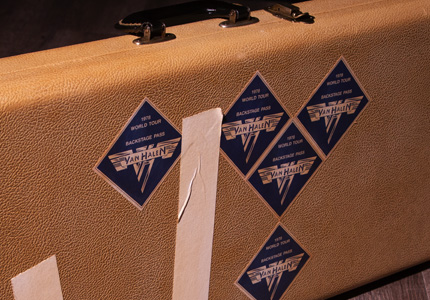 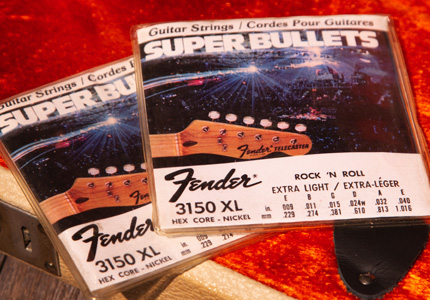